The Patriarchate of Aquileia is rooted in the importance of primacy of the Church and of the city of Aquileia, which for centuries was the gravitational center of the Roman province of Venetia et Histria. The Church in Aquileia was organized definitively by the middle of the third century; It was qualified by numerous martyrs, bishops by eminent for holiness and the word. From the fourth century onwards, Aquileia, while in the progressive weakening of the authority of the Roman Empire, expressed a fervent and generous Christian life, of which they were the protagonists, together with the holy bishops Valerian, Chromatius, also known personalities like the historian and exegete and Rufinus, the polyhedric Jerome. 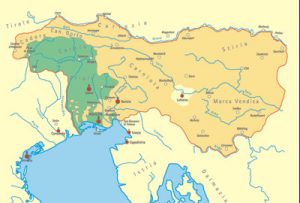 Although it is unknown exactly what were the beginnings of Christianity in Aquileia, the bond of communion with the Church of Rome and the Eastern Roman Empire is expressed in that tradition, which has established itself as the sixth century onward – that is to say since the Church of Aquileia had moved on Grado lagoons – which attributes the evangelization at St. Mark’s, sent in the territories of the northern Adriatic by the apostle Peter. It is told that Ermacora on presentation of Mark the Evangelist was consecrated the first bishop by Peter himself. After his martyrdom along with the deacon Fortunato is celebrated as patron of the Diocese of Aquileia.
In the following centuries, and for over a millennium until its abolition in 1751, the Patriarchal Church of Aquileia -whose diocese stretched in territory not only italic, but especially in the Slovenian and partly also Austrian – was the ecclesial reference center for many dioceses in Italy in the Po, so that Aquileia was considered the second most important church after Rome.
After Attila the Hun in 452 destroyed the Roman city, the patriarchal see moved to Grado. Subsequently the fortunes of Aquileia Church followed the complex and dramatic evolution of the kingdoms and empires that from time to time composed the historical and political physiognomy of these disputed eastern lands of Italy. Arose therefore a sea and lagoon Church of Aquileia, later known as the Patriarchate of Grado, gravitated first toward the Byzantine Empire, from 1451 was absorbed by the power of Venice and gave rise to the to today’s lagoon patriarchate. 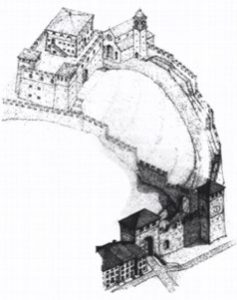 The Church of Aquileia Italic and Alpine hinterland become, instead, part of the German Empire territories. Since 1077 the diocesan territory was organized in a political-administrative institution that was overwhelmed in 1420 by the power of Venice. Various were the see of the Patriarchate after Aquileia, the castle of Cormòns, and then by 737, during the Lombard kingdom and the Frankish empire, the city of Cividale; Here, on the imperial mandate, he performed the holy Patriarch Paolino. The patriarch Poppo, during the early German Empire, renewed Aquileia by building  the palace, where the patriarchs and their Curia resided until the early thirteenth century. Berthold of Merania in 1222 transferred the seat definitely in Udine while retaining the title of Patriarch of Aquileia.

Undermined by outside powers such as Austria, Hungary, the Scaligeri, Venetians, the patriarchal state was conquered by the Serenissima Republic of Venice, and annexed to the Venetian possessions from 1420 until 1797. The secular authority of the Patriarchate passed into the hands of the Venetian magistrature recognizing the Patriarch the only cure of souls and the government of some fiefs (San Vito, San Daniele, Pavia di Udine, and Percoto Trivignano).
The wide trajectory of the Patriarchate of Aquileia reached its last moment of glory with his last two patriarchs Dionisio Delfino (1699/1734) and Cardinal Daniel Delfino (1734/1760). The patriarch Dionisio worked to equip the patriarchate of a renewed seat adapting architecturally the building, entrusting the fresco decoration to the young Giambattista Tiepolo, and especially preparing a monumental Library which endowed it with 9000 volumes of various topics of all the sciences then cultivated. Subsequently, the grandson Daniel promoted the establishment of the Patriarchal Curia Archives and the construction of an adjoining room at the Palace. A few years later, July 6, 1751, the papal bull Iniuncta nobis of pope Benedict XIV suppressed definitively the Patriarchate of Aquileia and in its place were established the Archdiocese of Udine, January 19, 1753, and that of Gorizia, April 18, 1752. The pastoral duties were assigned by the papacy to the archdiocese of Gorizia for the part related to the imperial territory, the Archdiocese of Udine for that falling within the domain of the Serenissima